Why Skies are Blue 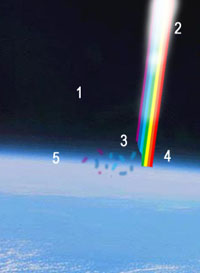 From outer space the Earth appears as a blue oasis in the dark vastness. From the Earths's surface skies appear blue, white, orange and red. The sunlight consists of all the colours of the rainbow. Together, these colours appear white.

More than 40km (25 miles) above the Earth, the sky is black (1). As "white" sunlight enters the Earth's atmosphere, blue to violet light is scattered by molecules in the air. (2) Normally, light travels in a straight line unless it hits something (i.e. molecules, dust, pollution, water droplets) that causes it to bounce off (or scatter) in different directions. The size of the particle determines how the light is scattered. Small particles scatter the shorter wavelengths (violet to blue), larger particles scatter the longer ones, like red. Eventually particles become large enough to reflect all wavelengths and the light appears white.

Air molecules are just the right size to scatter the shorter wavelengths of blue to violet. (3) The blue scattering begins at around 25km (18 miles) up. The longer wavelengths, like red, continue more or less unimpeded to the surface (4). The blue light waves are scattered all over the sky up and down in all directions. So, no matter which direction you look, blue light (or the scattered blue light waves) appears (5).

On hazy days, moisture droplets (or numbers water particles larger in size than air molecules) reflect all wavelengths equally making the sky appear either white or grey. Sometimes, pollution affects the skies' colour. The sky can appear to be brown or yellow because particles of the right size scatter those colours. All colours seen in the sky are the result of scattering caused by molecules or particles in the atmosphere.