Mackerel sky (ger: Schaefchenwolken; fr: nuages moutonneux)
is a popular term for a sky covered with extensive cirrocumulus or altocumulus clouds arranged in somewhat regular waves and showing blue sky in the gaps. The pattern resembles the scales on a mackerel, thus, the name. In Germany and France they are known as 'sheep cloud', as their pattern resembles a flock of sheep, also they are sometimes called buttermilk sky, regionally. 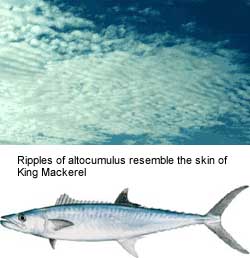 And of course there are weather lores associated to a mackerel sky. For example: Mackerel sky, mackerel sky - never long wet, never long dry. In the days of sailing ships they have been rightly viewed as likely forerunners of stormy weather: Mare's tails and mackerel scales make lofty ships take in their sails. Is there a true weather fact supporting this? Oh, yes there is. Small, white and fluffy cirrocumulus clouds typically consist of ice crystals and form at altitudes around 6,000 to 10,000m (18,000 t o 30,000ft). They often form well ahead of depressions and their associated fronts. Mackerel skies and mares' tails describe forms of cirrocumulus and twisted sheaves of cirrus respectively implying strong high-level winds. 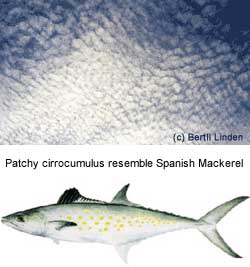 If they precede an approaching warm front, they will thicken and winds will veer from northwesterly to more southwesterly directions. Often the winds will strengthen, too. The typical width of an approaching warm front is about 500km from the first hazy clouds to the onset of rain. If you see a mackerel sky, then you are about 400km ahead of the rain. The typical moving speed of a system is about 50 kilometres per hour. Consequently expect the weather to change within the next 6 or 8 hours.

On the other hand, if a mackerel sky is made of the somewhat bigger and darker altocumulus, they might indicate a short term improvement. Altocumulus mainly consist of water droplets and typically form at altitudes between 3,000 and 6,000m (10,000 to 18,000ft). However, if they are becoming thicker and bigger, they might turn into a thunderstorm later, often associated with a cold front.